Look at the following video:

In your opinion, why is Charlie Parker laughing at Coleman Hawkins?
What does this reveal about improvisation?

Armstrong played originally in King Oliver’s band. Below you can see him with his band the hot five. Notice the absence of a drum set, and the presence of a banjo. 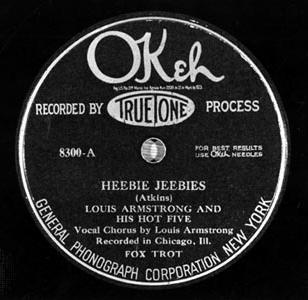 As you can see the discographic and radio industries thrive. Now, let’s listen to West End Blues, which features a rudimentary drum kit. It is a 12-bar blues:

Is there a leader? How can you tell?
What’s the role of the rhythmic section?
Is there a main melody/theme? How does it return?
What do you think is meant by “the blues”?
How is this blues one of the first jazz pieces?
A 12-bar blues has a pre-defined form and chord progression, improvisation happens on top? Why do you think this is?

Harlem Renaissance and the Swing Era

Duke Ellington at the Cotton Club. Notice: his piano playing style and his role as conductor; A drum set that is stylized with orchestral percussion instruments; The solo roles and rhythmic accompaniment roles are constantly traded; finally, what do you think is the function of the hats and the theatrical elements that surround it?

Now watch Ellington’s version of “Take the A Train” (1939), which was composed by Billy Strayhorn, a close collaborator and co-author of several of Ellington’s music. Notice: the Harlem themes in the lyrics; the singing styles of the soloist and accompanying scat sections; the piano solo. Who else has a solo and when? What is written out and what is improvised?

This song became a jazz standard and versions of it were recorded by other prominent musicians. Listen to Ellington and Ella Fitzgerald‘s version and its prominent scat section:

Now to to Charles Mingus/Eric Dolphy‘s version and pay attention to Dolphy’s solo around 4:20. What is different about Fitzgerald’s?

Listen to Charlie Parker’s Confirmation (1946). Notice the theme comes in twice at the beginning and then once at the end. In the middle a long saxophone solo (Parker) and then a few solos by the band. Try to listen for constantly changing keys and the extremely fast passages in the saxophone solo:

Here’s another example of bebop visrtuosity:

Listen to “So What” from the album Kind of Blue (1959). Listen for the introduction, then the theme and then Davis’ solo. Compare the sparsity of notes in his solo and the relaxed way in which he delivers it with the solo we just heard form Parker’s Bebop. Listen for the way the piano interacts with the trumpet, are they sharing this style? Finally, pay attention to the tonality of the piece. It should sound a bit strange because it is modal. There is a modulation in the chord progression, can you hear it?
[audio:http://www.jaimeoliver.pe/snd/mh/jazz/sowhat.mp3]

Listen to the song “My Favorite Things” from the Broadway musical the Sound of Music from 1959. This version belongs to the film version developed later and is sung by Julie Andrews in 1965.
[audio:http://www.jaimeoliver.pe/snd/mh/jazz/favorite-andrews.mp3]
Now here is Coltrane’s 1961 version:
[audio:http://www.jaimeoliver.pe/snd/mh/jazz/favorite-61.mp3]
Now compare it to a later solo, probably from 1965:

Now to this 1966 version at the Village Vanguard:

Here is an interview with John Coltrane around 1960:

Q. What do people mean by angry? Does his answer make sense to you?