was composed using the sounds of a piano, which were recorded by Pierre Boulez (we saw him in post-war…). The composition is based primarily on the “closed groove” technique (creating loops on a vinyl).

Q.1 Make a note of what you believe could be the sources of sounds. 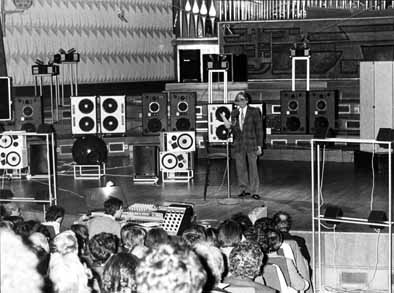 The Acousmonium: A Loudspeaker Orchestra

When in 1948 I suggested the term ‘musique concrète’, I meant, with this adjective, to signal an inversion in the practice of music. Instead of notating musical ideas in the symbols of traditional music theory, and entrusting their realization to known musical instruments, I wanted to gather concrete sound material, wherever it came from, and extract from it the sonorous musical values which it potentially contained. (Schaeffer, 1966)

… he wanted to emphasize that this new music came from concrete sound material, sound heard for the purpose of trying to abstract musical values from it. And this is the opposite of classical music, which starts from an abstract concept and notation and leads to a concrete performance. (Chion, 1995)

1972 Lecture by Stockhausen in Oxford, England.

How is synthesizing sounds a direct consequence of serialism?

Difference between mixing and synthesizing sounds?

What are the consequences of being able to move from form to rhythm to pitch to timbre? (The fundamental unity of electronic music) 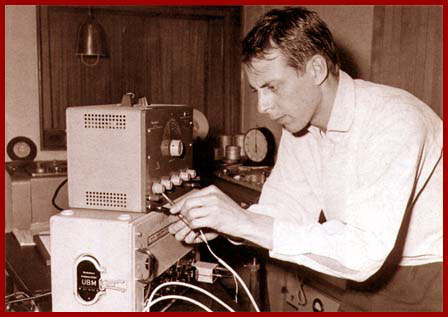 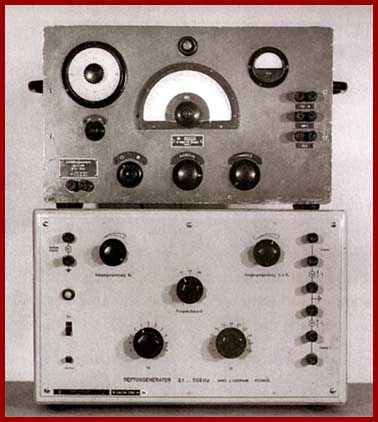 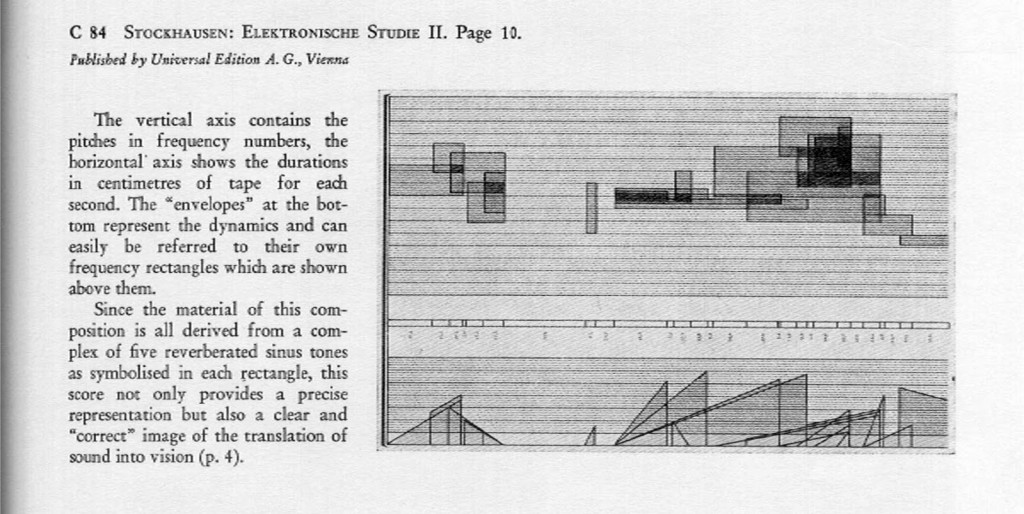 You can find a realization here. Try out the original score and then a random realization of the events. Can you tell the difference?

Kontakte is made of 16 continuously playing Strukturs or structures.

Here is Struktur X, right in the middle of the piece:

Here is the transition from IX to X:

Some ideas from Stockhausen:

“The scale of electronically produced timbres contains familiar tones, sounds and noises, and mediates between them (metallic, skinlike, woodlike etc.); it allows for the transformation of timbres from each of these categories to any other, and for their mutation into completely new and unfamiliar sound events.
“The title refers both to contacts between electronic and instrumental sound groups and to contacts between self-sufficient strongly characterised moments. In the case of four-channel loudspeaker reproduction, it also refers to contacts between various forms of spatial movement.”
“Nearly all the electronic sounds were produced with an impulse generator (the speed of the impulses could be varied continuously between 16 and 1/16 impulses per second, the duration of these impulses being variable between 1/10000 and 9/10 seconds). I also used a tuneable selective amplifier (used as a fairly narrow filter) with continuously variable band-width and correspondingly variable decay periods. A scaled band filter was also used. A few isolated sound events were produced by sine wave generators and a square wave generator.
“Most of the sounds, sound-noises and noises were produced by multiple acceleration of rhythmic impulse sequences. For some sounds an echo-plate with continually adjustable echo-lengths was used.”

Rhythms were spliced together from pulses, and loops from the rhythms. These were allowed to run for hours and the entire result was recorded. In a neighboring room a new loop was prepared, and also in a third.
“So there were loops running everywhere, and you could see it through the glass windows between the studios. Finally I used the fast-forward on the tape recorder to accelerate the tapes so they were already four or five octaves up, then the result went up another four octaves – so then I was up eight octaves – until finally I got into an area where the rhythms were heard as pitches and timbres.”

Finally, some insight into how magnetic tape manipulations work: